On Wednesday, June 8th we docked in La Havre, France, the second largest commercial port in France in terms of overall tonnage and the largest container port, with three sets of terminals. It can accommodate all sizes of world cruise liners. The port consists of a series of canal-like docks, the Canal de Tancarville and the Grand Canal du Havre, that connect Le Havre to the Seine.

It is situated on the right bank of the estuary of the River Seine on the Channel southwest of the Pays de Caux, very close to the Prime Meridian.

The town of La Havre is about a 25 minute walk from the terminal. 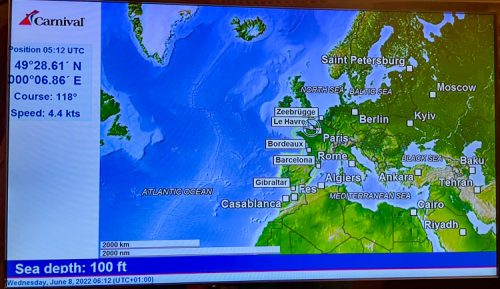 This was a long day for us, as we took a 10 1/2 hour “Paris City Drive & Seine River Cruise” excursion. We traveled by bus to Paris, a three hour drive to Paris, making it a 6 hour commute.  But the bus was comfortable and it stopped midway for a 15 minute stop for stretching our legs, shopping and bathroom break.

We experienced the beautiful city of Paris, also popularly known as the City of Light, through a scenic drive and relaxing cruise.  The bus toured around Paris where we were able to get some photos from the bus. We then had lunch on a river boat that took us up and down the Seine River. This was quite a large boat, as it included about 6 bus loads (about 35-40 people per bus) from the ship. They served lunch with two kinds of wines during the cruise, which was quite efficient given the number of people.  It was a very relaxing tour and way to view Paris.

From the river we passed several popular sites such as the Eiffel Tower, the Statue of Liberty that the US gave to Paris which is a smaller version of our Statue of Liberty, and the De La shallot Palace, the Lovre and Notre Dame Cathedral.  See map of Seine with sites of interest noted.

After lunch we got back on the bus and it took us to the Arc de Triomphe. We were allowed 30 minutes off the bus to take pictures and do any shopping.

Overall this excursion, although very long, was very relaxing and enjoyable. The only downside is we didn’t have any opportunity to take photos off the bus except at the Arc de Triomphe and that stop was limited to 30 minutes, so not much time for shopping, although by going down the wrong street managed to find a small tourist shop that was not packed by people from our bus.

The weather turned out to be surprisingly wonderful. It was in the high 60’s and overcast for much of the day. Once we got on board for the lunch cruise there was a huge downpour but it didn’t affect us because we were inside in an enclosed area on the boat.  After that the sun came out partially for some of the day.

If you do’t have a map of Paris Districts on hand, another way to easily figure out what city district you’re in is to look for the street signs that are affixed to the sides of buildings on pretty much every corner of the city. In addition to telling you what street you’re on, the plaques also show the arrondissement.

In 2020, Four Paris Arrondissements United under a new name: Paris center. Paris Mayor Anne Hidalgo’s plan is motivated by her desire to make the Arrondissements more equal in terms of the size of the population they serve, for example, while the 1st Arrondissement is home to just 17,000 residents, Paris 15 can count 240,000.

From Monday 13 July 2020, the new name of the four Arrondissements which make up the center of the city is Paris Centre. This name ws voted by the residents of these 4 Arrondissements. Residents also voted on which town hall should represent the newly united district, and the winning town hall was the 3rd Arrondissement’s town hall.

Even if the first four Arrondissements are grouped together for administrative reasons, the city’s post codes will not change. In other words, Paris will continue to have 20 Arrondissements.

The Arch de Triomphe, located in Arrondissement #8 and is one of the world’s best-known commemorative monuments. It stands at the center of the Place Charles de Gaulle (formerly called the Place de l’Étoile), the western terminus of the avenue des Champs-Élysées. From this center, 12 streets  spiral out and as we toured the city, we could see how these streets intersected with interesting architechture at these intersections.