Much of the following information was extracted from US and State census records. You will see many contradictions and errors. Although the people listed are probably correct, their birth dates don’t always match up.  Keep in mind that we don’t know who provided the information to the census takers at any given time.

Based on the birthplace of their first two children, we know that they lived in Pennsylvania from about 1850 to at least 1854. Philadelphia is where her two brothers were living at the time.

Sometime between 1854 and 1856 they moved to Egg Harbor, Galloway Township, New Jersey. In my research I found an interesting post titled “Egg Harbor City: New Germany in New Jersey” 1 by Dieter Cunz.  It is an interesting read that I highly recommend, but it also gives a clue to why the Ruehl family moved to this location.  Apparently Egg Harbor City owed its existence to two phenomena: railroad expansion and anti-immigrant feelings. 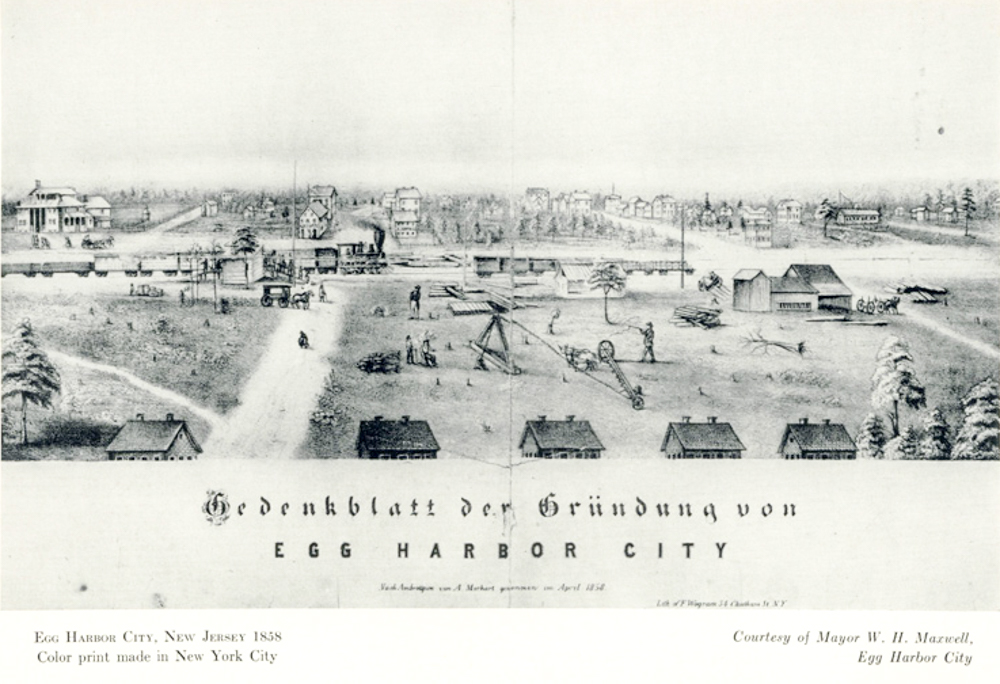 On the Board of Directors of the railroad company there were several men of German descent. They may have conceived the idea of a German settlement. However, this alone does not account for the fact that Egg Harbor City was planned as a pure German town and that this project soon became know to German-Americans all over the country. The decade preceding the Civil War was a time of turmoil and unrest, of tension and prejudice. The biggest wave of anti-immigrant resentment in American history, a movement called Knownothingism, swept the country. Irish and german immigrants became the main targets for this militant and aggressive group.

Although I doubt Henry Ruehl was part of the first party to travel to what was to become Egg Harbor City, he most likely heard about the community and moved his family there to see what opportunities there were. He is showing as a laborer and as a new community there was most likely opportunities for work.

The 1865 New Jersey State Census shows they are still living in the City of Egg Harbor, Atlantic County, New Jersey, USA. The following family is listed as the family of Henry Ruehl (note that Mary and John are not listed).

The 1870 US Federal Census shows Henry and Elizabeth “Reel” living in Military Township, dwelling and family #95. Her brother Wilhelm and family (Wilhelm listed as Herman), right above them as family and dwelling #94.  Henry is listed as a farmer, 46 years old with a personal estate value of $200.00, no real estate value. The following household members were listed.

All children are showing as being born in New Jersey [the first two children were actually born in Philadelphia as noted in other records]. I believe the family was living with her brother Wilhelm at the home farm in Military Township, Winneshiek County, Iowa, based on the placement right below Wilhelms’ family on the census record.

It is unknown why the family moved from Egg Harbor City, New Jersey to Military Township, Iowa, but it appears this may be a time of transition.

This census record does not show the status of their assets, but it appears that they were most likely renting their farm. I see no evidence that they owned any real estate.

The 1895 Iowa State Census for Military Townshship, Winneshiek County, Iowa. I suspect they were living is Ossian, as that is where Elizabeth would die later this year on September 4, 1895 at the age of 71. This census shows the following household members:

By the 1900 Census, Elizabeth is deceased and Henry is a widower living with his daughter Katie and her husband Anton Senera, as is her sister Margareth “Maggie” in Cooper, Webster County, Iowa. He is showing as immigrating from Germany in 1850 and in the US 50 years. He is showing as naturalized.

Henry Ruehl died in 1903 at the age of about 77 in Cooper, Webster County, Iowa, USA. Henry and Elizabeth are both buried in Ossian, Winneshiek County, Iowa at St. Francis de Sales Catholic Church Cemetery.

In trying to figure out the approximate time of marriage for Henry and Elizabeth, I looked at  birth date of their first child, Maggie, assuming they would have married prior to that date.  Unfortunately the census records contradict each other and I couldn’t pin her birth date down. If, as noted in the 1860 census, their daughter Margareth was 10 years old in 1860, then it’s probable that Henry and Elizabeth married before or shortly after immigrating from Germany in 1850 (this is the immigration year listed in the 1900 census, but I could not find a record of their immigration]. If the later census record, showing birthdate of Feb 1852, is correct, then they may have met and married in Philadelphia.  I’ve not been able to find the immigration record for either of them or their marriage record.