Tuesday, May 31st we docked in Gibraltar, UK. We decided to skip the ship tour, which would have been in a bus with up to 40 people and would have required us to walk up a large part of the trip up the “Rock”.

When we got off the ship, there were vans offering private tours for up to 8 people per van.  We decided to take this option and were very happy with the results. We had an excellent guide and he drove us all the way to the top!!!

Stops also included St. Michaels Cave, a network of limestone caves located within the Upper Rock Nature Reserve) and the Pilars of Hercules. We saw wonderful scenery from the viewpoints. You can see Gibraltar, Africa, and Spain from the viewpoints.

We got to see Gibraltar’s world renowned Apes and watch their antics.

We also saw the view of the airport, which was interesting because the only road from/to Spain had to be closed during landing and takeoff, as the road goes right across the runway.

We were dropped off downtown where we stopped for a cool drink. John had an Italian beer, and I had a Pepsi. It was a lot of walking after they dropped us off but nothing we couldn’t handle. The downtown was interesting with cobbled narrow streets. The driver said if you can drive in Gibraltar, you can drive anywhere in the world and I would believe it, as the streets were very narrow.

The weather was perfect, about 80 degrees. A bit hot in the sun, but we had no problem finding shade when needed.

After dinner we attended the Broadway Show with Broadway star Chuck Wagner who was very good.

Note on the Map of Gibraltar 1 the runway at the top of the map and just above it is Spain.  The road to Spain runs across the runway and traffic has to be stopped for incoming and outgoing flights.

Gibraltar is a British Overseas Territory and city located at the southern tip of the Iberian Peninsula. It has an area of 6.7 km (2.6 square miles) and is bordered to the north by Spain. The landscape is dominated by the Rock of Gibraltar, at the foot of which is a densely populated town area, home to over 32, 000 people, primarily Gibraltarians.

In 1704, Anglo-Dutch forces captured Gibraltar from Spain during the War of the Spanish succession. The territory was ceded to Great Britain in perpetuity under the Treaty of Utrecht in 1713. It became an important base for the Royal Navy, particularly during the Napoleonic Wars and World War II, as it controlled the narrow entrance and exit to the Mediterranean Sea, the Strait of Gibraltar, which is only 13.3 km (8.0 miles) wide. This choke point remains strategically important, with half the world’s seaborne trade passing through it. Gibraltar’s economy is based largely on tourism, online gambling, financial services, and bunkering. Bunkering is the supplying of fuel for use by ships (such fuel is referred to as bunker).

The Pillars of Hercules is the ancient name referring to the two promontories at the eastern entrance to the Strait of Gibraltar, a narrow opening 14 kilometers (8.7 miles) wide between the Mediterranean Sea and the Atlantic Ocean separating the continents fo Africa and Europe.

I found the following interesting Air Views of Gibraltar that gives a better perspective of where “The Rock” is. 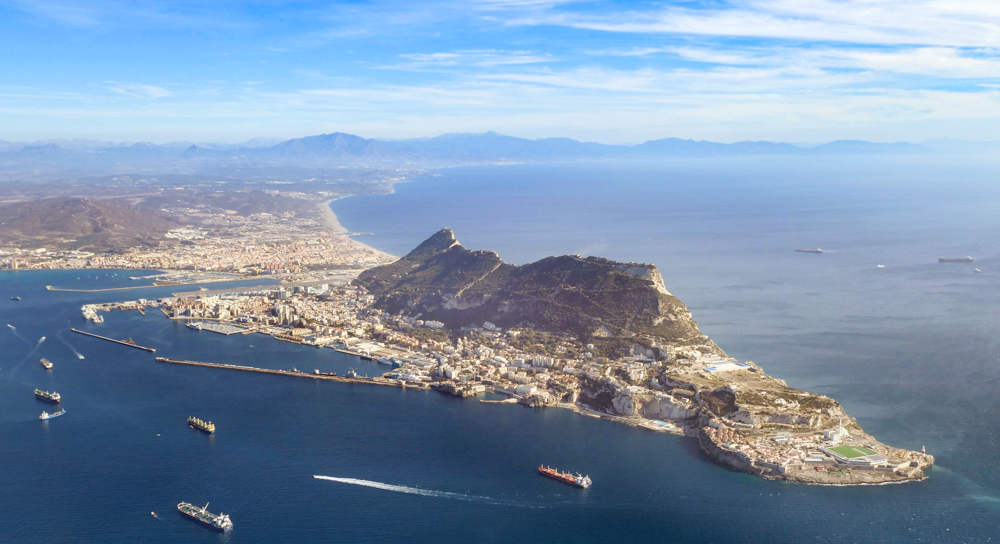 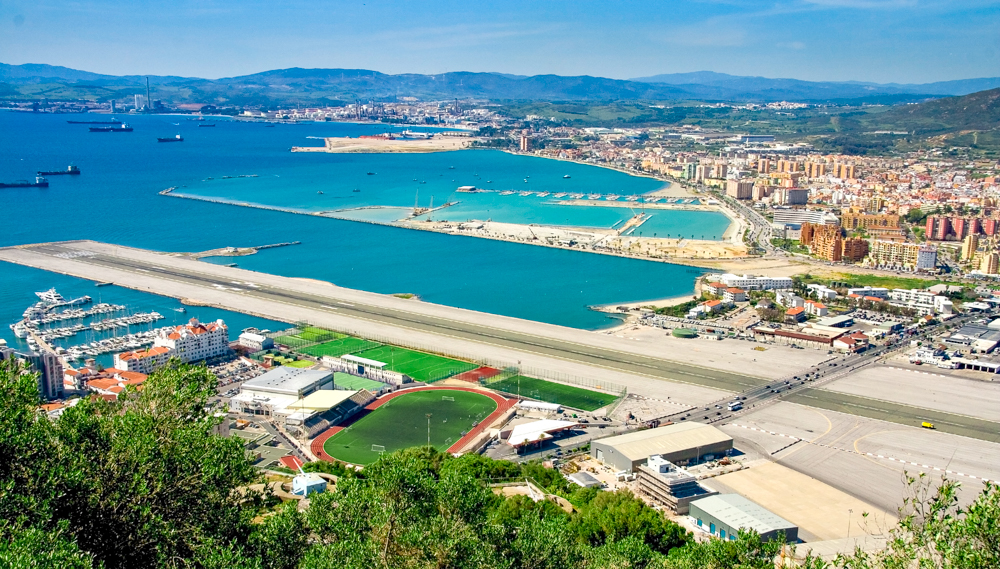 Click on a photo to get easy pop up to scroll through photos.