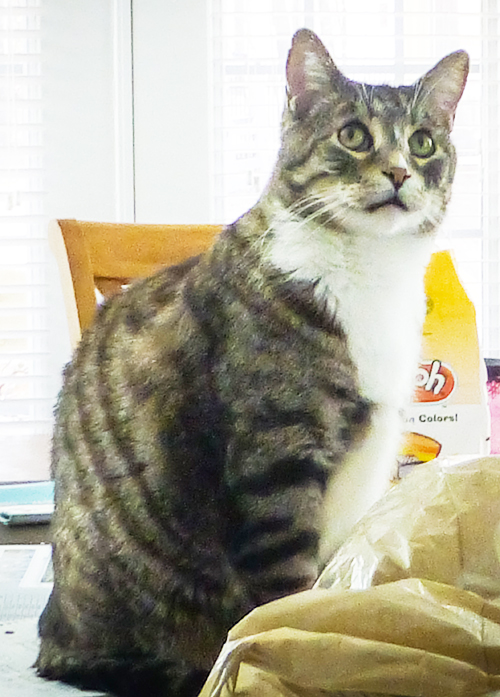 Wednesday, February 17, 2016 at 10:00 am we lost our buddy Stanley. About a month ago, he was diagnosed with Lymphoma, which is a cancer of the lymphatic system. We observed it in his left eye and tests revealed it was also in his small intestine. We thought we’d have 3 to 4 months before we’d lose him, but the cancer was extremely aggressive and had spread into his jaw, consequently we lost him much sooner than expected.

We adopted Stanley in the spring of 2004.  Toni (my daughter) and I had gone out to do some shopping and stopped at the Pet Smart in Lone Tree Colorado for some dog food for Toni’s dog, Berit.  While there, we noticed a cat adoption event and went to look at the kittens that were available for adoption. Since we only had Katie  (our other cat) and we thought Katie 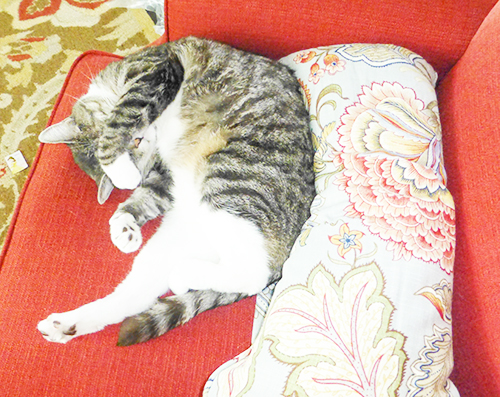 was lonesome, we had been thinking of getting her a companion. Toni and I thought the kittens were cute, so Toni called John to have him come down and look as well.  John declined to come down, but about 20 minutes later Toni called again and told John “how can you say no when you haven’t even seen the kittens?”.  Toni was right, and John being the cat lover he is set off for the Pet Smart.  Once there John looked at the kittens but was immediately drawn to an adult cat in a cage above the kittens. That adult cat was named Stanley.  He opened the door to the cage, and Stanley immediately climbed into John’s arms, putting his paws around John’s neck and the deal was sealed. Stanley had found a new home. The adoption card said Stanley was 3 years old, but we believe he was about 2 then, so would have been about 14 years old this year.

Stanley was usually hanging around with his people. He followed us around like a puppy dog. When John would be working outside it was common for Stanley to watch and follow him from window to window sometimes fighting through the blinds just to stay within eyeshot of John.  He was our curious and in many respects fearless cat (Katie on the other hand is a scaredy cat). We could always tell when something surprised or scared Stanley. His tail would poof out like a bottle brush.  Funny. He showed his affection with a head butt or a cold nose to your nose. 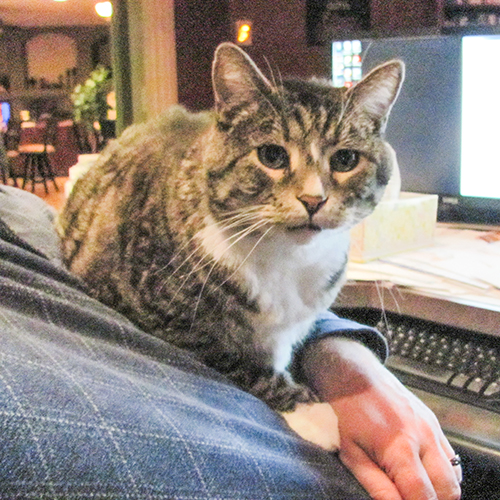 In Colorado our house had a glass-block shower that stair stepped up allowing Stanley to climb up on top the shower and watch whom ever was showering, most often John.  Many times, Stanley would start edging his way down into the shower with a look in his eye that said “I want some lovins”.  John found that if he extended his hand Stanley would rub his head against it.  Since his hand was wet, Stanley’s face would soon become soaked.   We eventually came to refer to this as Stanley getting a face wash.  It became a routine shower event every morning. 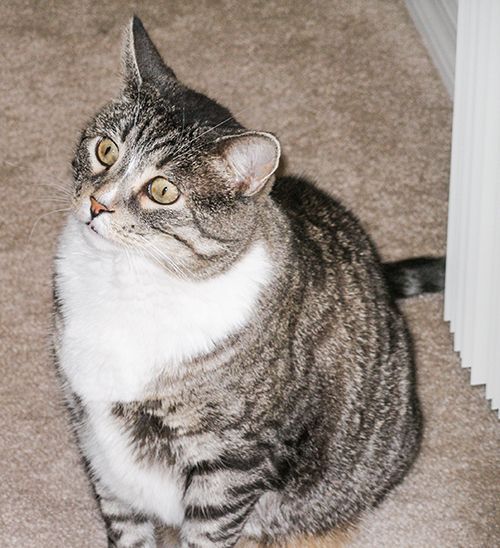 Stanley had what John called “Operating Modes”. Most often Stanley operated in “Cold Kitty Mode”. Stanley did not have a thick fur coat, so particularly in the winter, if you sat in a chair, Stanley would hop into your lap and nestle his way in between your legs and settle in. You knew he was there for the long term if he went into “Cleaning Mode”, where he would groom himself. He would lie between your legs for hours. The next mode is “Love Mode”. There would be times, like in the shower for the face wash, where his eyes would glaze over and he would be in your face (literally) wanting lovins. The last mode, which is kind of an extension of “Love Mode” is “Peacemaker Mode”. Occasionally John and Pat would get into animated discussions usually about business issues and our voices would become raised. In those cases Stanley would get in the face of one of us purring loudly. This would always make us laugh, disrupt our discussion and make the peace. 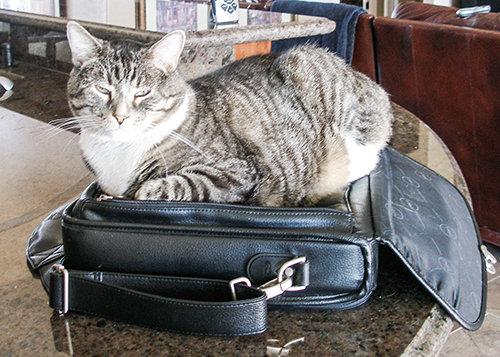 Stanley also had a pen fetish.  If you were writing anything he would want to play with the pen like it was a toy.  A pen left on a desk would soon be on the floor.  If we had someone come by who was writing something up, their writing instrument would soon become an object to be played with.  We would often say “knock it off!” to get him to stop.  Stanley would look and seemingly say OK! as the pen hit the floor. 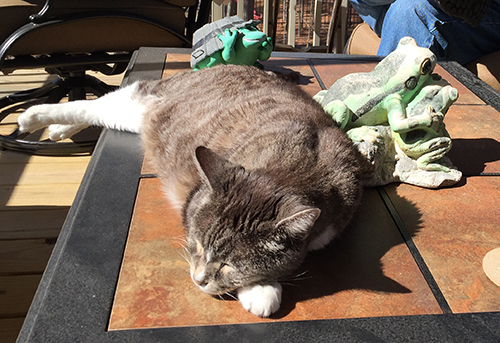 He would ride around on John’s shoulders. When John would come down stairs he would stop at the top of the stairs and Stanley would hop onto his shoulders from the stair wall and ride down. On nice days he would lay out on our screened in porch and soak up the sun and watch the birds. He slept with us almost every night, usually between Pats legs in the winter when it was cold and at the bottom of the bed when it was warmer. He would sometimes lay on top of one of us and sleep. 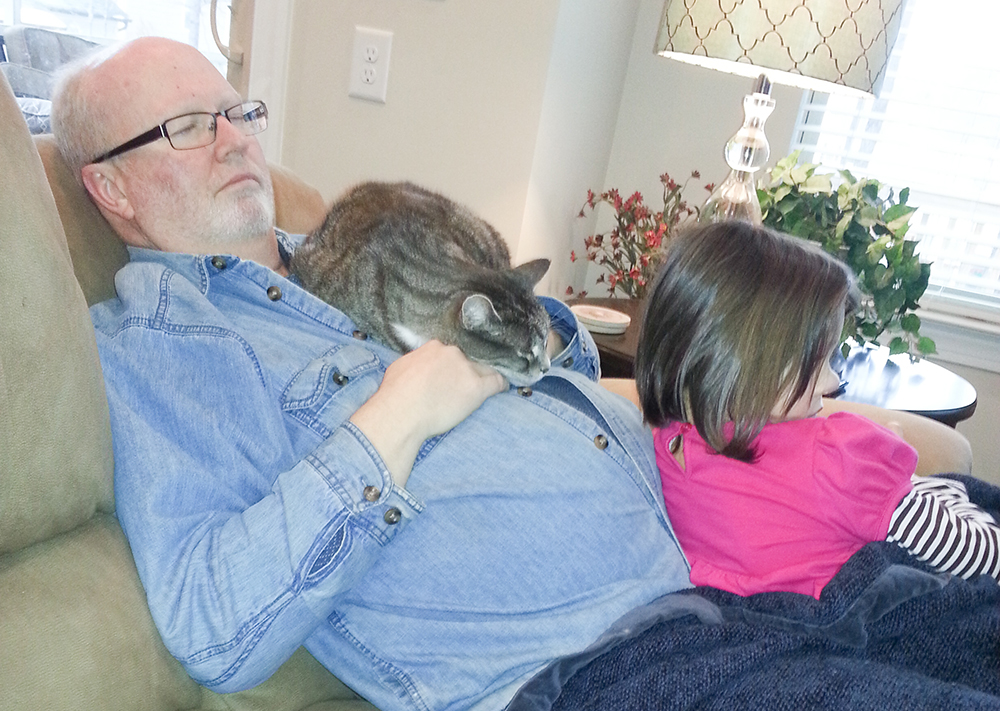 Stanley (and Katie) would beg. Whenever we were in the kitchen, he’d jump onto the counter (We know, bad habit, but he was spoiled) and watch us prepare food, waiting for a handout. He loved ice cream. A carton of grape tomatoes left on the counter would often be nudged, butted or knocked to the floor to release their treasure. Over the last couple of months we started giving them soft food and senior cat food, but he still ate some of his crunchy food. 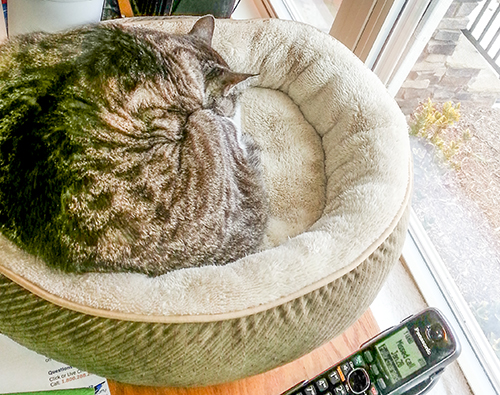 Stanley had a great personality. He greeted all our guests like family and didn’t discriminate. We’d often find him spending the night in our guests bed. He was a lap kitty. He would spend hours on our laps.  He was a cold kitty, so he loved the warmth. If there was a sunny spot, he would find it. He was a jumper and when young we would find him on top of the kitchen cabinets. As he aged, his jumper didn’t work as well, as the vet thought he had arthritis.

He endeared himself to most, even dog people. On more than one occasion we had people say they would like to take him home, and these were the dog people. Kelly (my son, who is a dog person), called him a Cool Dude. He had a great personality and he will be missed. 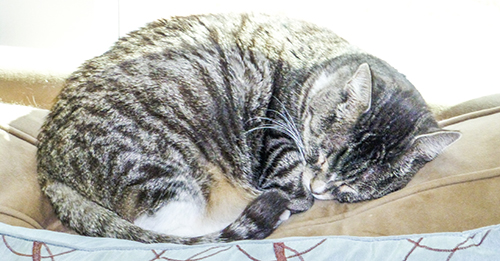 Stanley loved so much and asked for so little.  He was always around, always with you. There were often times when we would be sitting on the couch watching TV and suddenly you would realize Stanley had come and settled in between your legs or onto your lap quietly. “When did you get here?”, we would ask and Stanley would just look back lovingly. When not on a lap, you may find him sleeping on the back of the couch or in his bed in the office. If we were up and about, he’d find a place close by to lay and watch…usually

on something, like a grocery bag, a laptop bag, or whatever was available. If we got the suitcases out, you find him on (or in) the suitcase (both cats knew suitcases were bad news).

Every morning he would watch John leave for work from his bed in the office or from the hallway and then be there to greet John at the door when he got home in the evening seeming to ask how was your day? and is there anything I can do for you? John always thought “nothing, you are already doing it”.

Our sweet buddy and tabby, we miss and love you. You will always and forever have a place in our hearts.  RIP

Stanley frequently showed up in a family pictures (Katie was probably hiding under the bed):