Historic General Land Office Plat Maps: Starting in 1812 land was divided into square six mile blocks called townships, then subdivided into sections and ranges. The sections were numbered 1-36 and were typically 1 square mile each. Each subdivided area was surveyed and given it’s own map or GLO.  Survey plats are part of the official record of cadastral survey. A cadastral survey is a survey which creates or re-establishes the boundaries and subdivisions of Federal Lands. The survey plat is the graphic drawing of the boundaries involved with a particular survey project, and contains the official acreage to be used in the legal description. The Bureau of Land Management now maintains these GLOs as part of official Land Status and Cadastral Survey records. [1]

I know that my great grandfather, William Doerr, was born, raised and remained on the family farm in Military Township, Iowa.  I was able to find plat maps for the years 1886, 1915 and 1930. The Iowa Maps Digital Collection [2] has a variety of free maps for all states.

<— This comparison shows Section 18 of the Military Township, Iowa and how the property changed ownership between 1915 and 1930. By 1930 my great grandparents were 75 and 70. The 1930 census shows my great grandparents living on the farm with their daughter, Helen and her husband, John B Moellers.  So sometime later they sold the farm to Clemen Lechtenberg (who is distantly related). The Moellers show having their own property in Section 20 in 1930.

Plat Maps typically show the name of the owner, number of acres and buildings.  You can see the 1930 map does not include the buildings or acreage.

Below is a sample of the 1886 Military Township, Iowa Map. My great grandfather, William Doerr, owned property in section 18 and section 33. In reviewing the Townships located on the other sides of Military Township, I found properties owned by other branches of the family. I also noticed the spelling of the names were not always correct.

Based on the ownership of the properties, I can piece together more of the story. My great great grandfather, Wilhelm Dörr (later William Doerr, Sr), migrated to the United States in 1846. He lived in Pennsylvania, where he married my great great grandmother, Anna Druffner, in 1850.  They were in Philadelphia for several years before moving to Military Township, Iowa.  His Naturalization papers were dated March 1852 and his residence was Military Township at that time. Their first child, Helena, was born on April 29, 1851 in Philadelphia. So we can assume that they moved to Military Township sometime between April 1951 and May 1852. I was unable to find a plat map for that time period, but assume that he purchased the Imoehl property and the Doerr property showing on the 1886 map, totaling approximately 300 acres. Helena married Joseph Imoehl in 1871.  So, sometime before 1886 (this was also the year my great great grandfather died), they purchased (or inherited) the 119 acres in the NE section and my great grandfather, William Doerr Jr, purchased (or inherited) the 181.5 acres in the south and north sections and sold the property in section 33 shortly after. 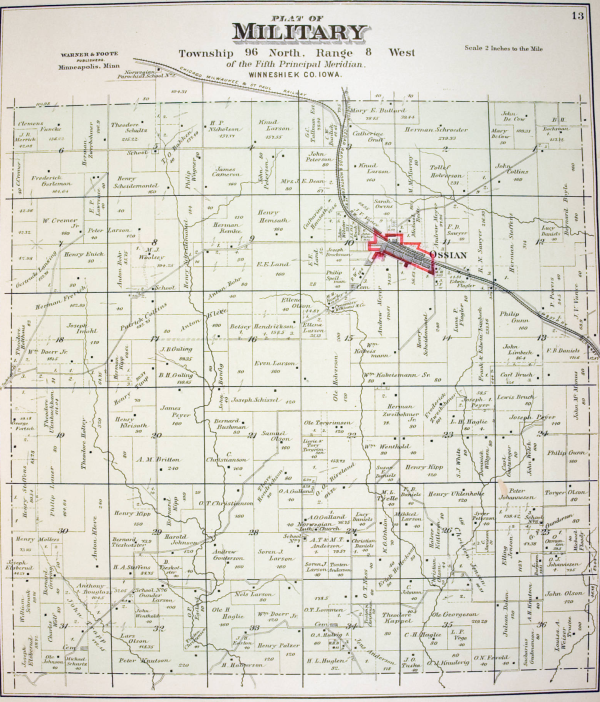