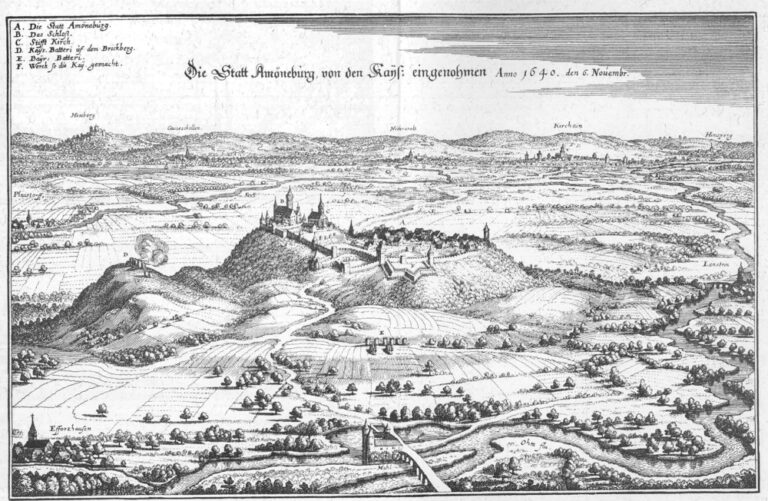 Ludwig Dörr is our first known Dörr ancestor. He was born about 1615 in Rüdigheim and died between prior to 1677 in Prussia. Ludwig’s wife’s name is unknown.   According to one of our German cousins, who currently lives in Niederklein, the Dörr family roots go back to 1496 in Rüdigheim.

Although little is known about Ludwig and his children,  Rüdigheim was a Mainz property in the surrounding area of Amöneburg and part of the Holy Roman Empire at the time of Ludwig’s birth and most of his life. [Note that there is a Rüdigheim in the municipality of Neuberg, not our Rüdigheim],  He and his family would have been impacted by the 30 years’ war (1618-1648) that was fought from the time he was a young child and into his adulthood. Although they lived in Rüdigheim, who was controlled by Mainz, that community was only about 3 ½ miles south of Kirchhain, who was controlled by Hesse. The wars between these two powers had to have impacted this area and our ancestors as well.

The important Hessen and Cologne-Leipzig trade roads made Kirchhain a road hub (and thereby spurred on the town’s further economic development). Its good traffic connections, however, led to Kirchhain being occupied a few times during the Thirty Years’ War, becoming for a time the headquarters of various armies, and thereby having to suffer as troops were billeted in the town. In 1636, about 12,000 to 14,000 soldiers were being housed in and around the town. For the 1,000 or so townsfolk at that time, this was a tremendous burden. Could this have impacted the community of Rüdigheim, only 3 1/2 miles away?

Many of the ancestry trees I found show Ludwig’s birthplace as Kirchhain. Although Kirchhain was only a few miles north of Rüdigheim, Kirchhain was  Protestant, whereas Rüdigheim was Catholic, as was our ancestors.  This was a strong political devide.  I believe the confusion may be due to Rüdigheim being a part of Kirchhain district starting about 1821.  The map above shows Amöneburg at the top of the hill. Rüdigheim is nestled lower on this side of the hill, not really showing in the 1640 map, so perhaps, he was actually born in Amöneburg?  In my post on the Rüdigheim, Amöneburg, Hesse, Germany, you’ll find a current map to compare to and where I’ve noted its Place Name Changes and dates as best I could figure it out..Mainz