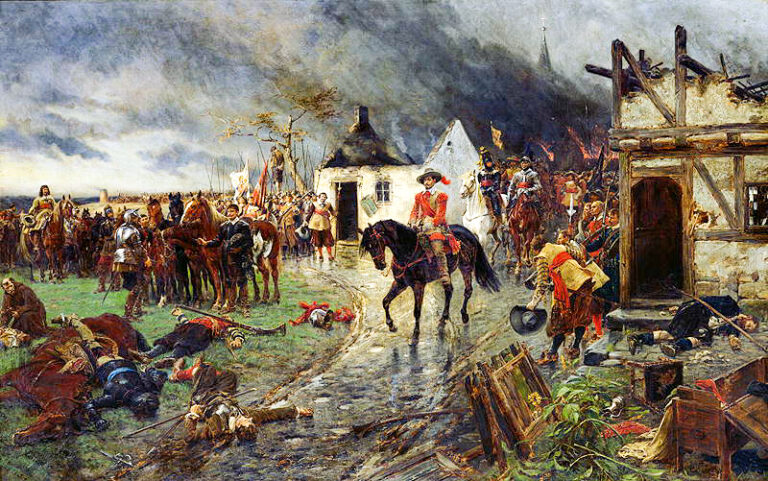 The Thirty Years War (1618-1648) was especially devastating. The Elector changed sides three times, and as a result Protestant and Catholic armies swept the land back and forth, killing, burning, seizing men and taking the food supplies. Upwards of half the population was killed or dislocated. Berlin and the other major cities were in ruins, and recovery took decades.

The following is an excerpt from a paper written by Ois_n O’Driscoll that I found on the University of Ireland, Galway website and titled Assessing the impact of the Thirty Years War on the population of the Holy Roman Empire, taking Hesse Kassel as case study: 2

During the early years of the war the primary stress on most civilians were the contributions demanded by armies from the local population, which would take the form of money, food, or being forced to billet soldiers in winter. The burdens were negotiated between local authorities and commanders, and in the early years of the war in most areas the system essentially functioned as it was meant to, with villages certainly resenting the additional burden but generally meeting the demands without starving themselves. But as the war pressed on these civilian military relations began to rapidly break down, and the result was that more and more civilians fled at the first sight of troops rather than risk attack. [We have no reason to believe that the Dörr Family fled, since their children and grandchildren appear to have remained in the area, however, they could have gone into exile and returned at a later date as many families did].

Of Hesse Kassel [spelled Hesse-Cassel during it’s existence] it’s been written that it was a region of hills and valleys, with a low population density and a largely agricultural economy. Most of the region’s population lived in small villages of clustered timber and clay houses surrounded by farmland and a communally held forest, with each village forming a specific administrative district with a defined boundary and a chosen representative, who reported to the Landgrave and/or the local Lord. In the pre-war period the region was relatively poor. Local life was centered around communal spaces, primarily the church which defined each village as a unit within the local parish and which constituted the village’s main social space.  Villages were strictly patriarchal in their organization, and most families were small, nuclear units headed by a married male. However, while widowed men would typically remarry almost immediately, widowed women were less likely to, and approximately 24% of households were headed by widows, often with multiple dependents including single men (unmarried sons/brothers).

The region had become Lutheran early in the Reformation, but from 1604 on Hesse Kassel had officially converted to their Landgrave’s personal form of Calvinism. By 1618 it appears that the majority of villagers had accepted the new religion, but a minority of Lutherans were tolerated. Jews made up a smaller minority, tolerated but socially isolated and legally discriminated against, and there was a small population of Catholics.

At the outbreak of war in 1618 Landgrave Moritz attempted to remain neutral, but Hesse-Cassel’s central location in Germany and his own reputation as a politically active protestant leader ensured that the war would not be kept out. In 1623 Tilly led the first troops into the region, planning to use it as a bulwark against Danish action. The nobility defied their Landgrave and essentially surrendered to the Catholic army without a fight. Moritz was unable to resist, and the villages had no means of self-defense. Tilly quickly established a provisions ordinance, liaising with village leaders to organize the extraction of contributions. In the early stages of the occupation those demands, though burdensome, were not disastrous for most villagers. Discipline was poor, but it appears that the soldiers at this point primarily stole food rather than valuables. Villagers had no legitimate means to defend themselves from undisciplined soldiers or to resist the contribution system, but at this stage they were still able to appeal for protection to their Landgrave or to officers in the Catholic army, and often did. In this first phase of the ware the villagers found themselves under new strains and facing new obligations and dangers, but they were largely able to adjust.  As in the Empire as a whole the relatively small population of troops should have been within the supply limits of the agricultural system. When the respective administrations of the army and the villages were functioning, and when the burden was properly distributed and organized, it was possible for the villages to support these armies. But as in much of the Empire the following years would see an increasing number of troops that had to be supported in ever worsening conditions, pushing the local economy well beyond its limits.

In 1626 we get the first record of four villagers being murdered by Tilly’s troops. The system was beginning to break down as the nobles, unable to protect their own property or the villages, fled. Landgrave Moritz went into exile in Denmark and then abdicated in favour of his son Wilhelm V. Tilly’s troops returned from campaign in 1627 and this time they brought dysentery and plague with them. Numerous villages were devastated, and flight became an increasingly common response to th approach of troops. As has been mentioned this tendency to flee from troops separated villagers from their local support structures and placed them in conditions that encouraged the spread of disease, leading to a direct increase in mortality.

The war experience of Hesse Kassel entered its third and final phase in 1635. When a further round of epidemics again devastates the villages. By this time all semblance of organized occupation had collapsed, and troops appear to have been marauding the area, taking from villagers at will. This made it extremely difficult for villages to travel, preventing them from hiding in the nearby countryside and waiting for soldiers to pass.  Villagers now had to make a choice; to flee on a long-term basis to a nearby city or town or attempt to weather the storm in their homes. In 1637 Wilhelm V died in Denmark and his wife Amelie Elisabeth became regent-in-exile, commissioning a detailed report of her surviving possessions the following year. The report made for grim reading. The village of Reichensachen claimed that they had fallen from 172 ‘hearths’ in 1623 to only 72 by 1639, with 13 families living in makeshift structures. Amelie Elisabeth’s surveyor shows a 50% population loss for the region as a whole by 1639, albeit with wild variation. It also indicated that some villages up to half of households were headed b widows, a startling statistic when we remember that Hesse Kassel was not supplying a major number of soldiers to any army.

Despite these pressures, no villages disappeared entirely, and in the post-war period we see a strong impulse among refugees to return to their original homes.  By the 1720s all villages had grown beyond their pre-war levels.