Old Mission is referred to in many biographies and histories of the Winnebago Indian Mission when they were relocated from Wisconsin to Iowa by the US Government in 1833. After moving the Mission to Ft. Atkinson, Iowa, a mission school was established a few miles Southeast just south of what is now is Festina, Iowa.  The Mission, School, Church and cabins were eventually abandoned when the Winnebagos were again relocated, this time to Minnesota in 1848 and 1849. You can see my posts on Washington Township and Festina / Old Mission posts for the story about the history of Old Mission.

Several families from Oldenburg, Indiana moved into the area in 1949, reaching the Turkey River in April.  and used the buildings as temporary homes. One of the largest cabins, excluding the school, was purchased from the government and relocated to Section 27, in Washington Township just south of the Turkey River to be used for worship for this small Catholic community and was called the Old Mission Church.

In 1954, this church was burned down and St. Mary’s -Lady of Our Seven Dolors Catholic Church was rebuilt in a new location in what is now Festina, Iowa.

The location of the Old Mission Church would be where the St. Anthony of Padua Chapel (aka “Smallest Church”) would be built.

My 2nd great-grandmother Elizabeth (Bouillon) Untereiner, was the first cousin of Magdalin (Bouillon) Gaertner, wife of Johann Gaertner. Their daughter Mary Ann Gaertner, married Francis Joseph Huber. Together they built the smallest church in the world at Old Mission, Festina. This was to fulfill a vow by Mary’s grandmother, Elisabeth Hoffman Gaertner, mother of Johann Gaertner, for her son, Johann’s, safe return from serving under Napoleon which included the burning of Moscow.

When Johann Gaertner was sixteen years old, he was drafted into the French army under Napoleon Bonaparte, and his very religious mother, fearing that her son would become another victim of Napoleon’s army, whose soldiers lie in Europe in marked and unmarked graves by the hundreds of thousands, made a promise that on his safe arrival home from war, she would build a chapel in honor of the Blessed Virgin Mary.

She did not live to fulfill that promise.

Johann (now known as John Gartner) knew of the promise and many times told his children of it. Then, one day in 1885 as John and his daughter and son-in-law, Mary Ann (Gartner) Huber and Frank Joseph Huber were visiting graves in the old church yard in Old Mission, Iowa, Mary Ann approached him with these words, “Father, here is the place to build that chapel that your mother promised to build in your honor.”

Relatives and neighbors helped carry out the plan. You can see the location of the Chapel on the map above. 1 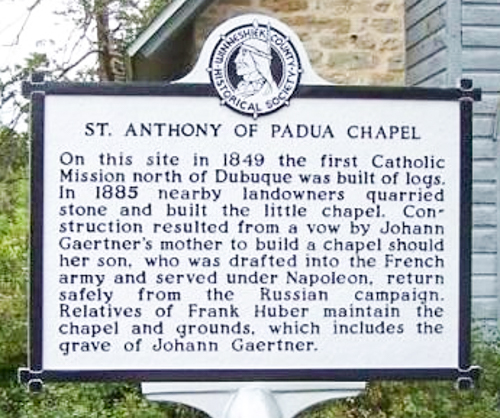 The following stories are found at the website: Winneshiek County IAGenWeb, St. Anthony of Padua Church, although similar, each story includes additional details of interest and I’ve added a bit of formatting for easier reading.2  You can also find photos of the Chapel, the stained glass windows and the Huber Cabin at the above link.

World’s Smallest Church Beckons Visitors For more than 100 years, the doors of St. Anthony of Padua Chapel, near Festina in Winneshiek County, have beckoned to bring worshipers inside. But at “The Smallest Church in the World”, church-goers may have to take their turn at worship, because the tiny chapel — 20 by 14 feet in size — seats just eight people in its four pews. Even so, the church has served as the setting for more than 90 weddings, mostly for descendants of Johann Gaertner, his daughter Maria Anna, and her husband, Frank Joseph Huber, Sr., the builders of the church. The Smallest Church is located two miles from Festina, three miles from St. Lucas and five miles from Ft. Atkinson. The Chapel still has its own bell, in a belfry that stretches 40 feet high.

The chapel’s fascinating history dates back to 1832 when the Winnebago Indians signed a treaty with the United States, giving up a sizeable portion of their land in Wisconsin. In return, they received a smaller tract of land given up by the Sac and Fox Indians in northeastern Iowa. Fort Atkinson was built on this land to protect the Winnebagos from other tribes. Then in 1846 treaty was signed, exchanging all the Winnebagos’ lands in the U.S. for unspecified lands in central Minnesota. This left a large tract of land in northeastern Iowa completely unpopulated after the garrison abandoned Fort Atkinson in February on 1849.

Several families from Indiana moved into the area in the spring of 1849, reaching the Turkey River across from the Indian agency in April. However high waters prevented their crossing until May. The group of settlers were Catholic and worshipped at a log church at Old Mission, the site of the present Chapel, called Our Lady of Seven Dolors. This church burned down in 1854, and the congregation dispersed to other churches nearer to their farms.

A new log church was built two miles northeast of Old Mission at Festina. Some years later the Old Mission cross was splintered by lightning and it’s presently concealed beneath the floor of the St. Anthony of Padua Chapel.

In 1885 Francis and Maria Anna Huber and John Gaertner began to build a stone chapel near the site of the old log church that had burned. When Gaertner had been drafted into Napoleon’s army in France, his mother made a promise to build a chapel in honor of the Blessed Virgin if he returned safely. However, a depression followed the war and she was unable to fulfill her promise before her death. Gaertner remembered his mother’s promise and told his children about it. Maria Anna Huber suggested that it be built on the site of the old church.

Neighbors helped build the chapel. Ferdinand Barthelme, Clem Brockkamp, Joe Huinker and Nicholas Wagner quarried the stone from a quarry on the Huber’s’ land known as Snake Hollow because of a large den of rattlesnakes there.

The chapel dedication took place in 1886 by Rev. August Sauter, then pastor at Festina. Joe Spielman donated $20 toward the bell, and Gaertner gave $75 toward the wood in the building. The balance was paid by the Hubers.

Johann Gaertner and Frank Joseph Huber both died in 1887. Mrs. Huber carried on the work alone and had the vestibule built in 1888. Before her death in 1902, Maria Anna Huber donated stained glass windows.

Beneath a picture of the church it says: Smallest Church at Festina St. Anthony of Padua Church, rural Festina, is proclaimed as the smallest church in the World. The chapel measures 20′ x 14′ and seats only eight people in its four small pews, but it has been the setting for nearly 90 weddings, mostly descendants of Johann Gaertner, his daughter Maria Anna, and her husband, Frank Joseph Huber, Sr.

Submitter note: Taken from one of the many scrapbooks Dorothy (Livingood) Schave compiled in her lifetime, 1920-2008. She did not date this one or name the paper but two other articles in the scrapbook she had dated 1991 and I assume it was the Postville, Iowa paper of the time.

Letter about the history of Old Mission and the Saint Anthony of Padua Chapel:

My grandfather, James Puffer, lived in Fort Atkinson all of his life. In going through his things that were passed down through the years I have a transcription of a conversation with F. J. Huber concerning the history of Old Mission. I don’t think this could have been a conversation that my grandfather had with Mr. Huber, unless there was a second generation also with that name. Or, this was shared with someone other than my grandfather, and they later transcribed it. It then came into the possession of my grandfather. It is written on “ruled” paper, and I don’t know when this came into existence.

The Story of the Old Mission I believe there is a misunderstanding concerning the Old Mission. Undoubtedly you have reference to the smallest church in the world, as it is commonly called by writers; though, in fact, it is a chapel dedicated to Saint Anthony of Padua.

In regards to the Old Mission, this was a government school and mission for the Indians, wherein the Winnebago Indians were taught Christianity and farming, but in 1848 the Indians were moved to the state of Minnesota. From there on the Old Mission building was unoccupied by the government, but served as a shelter for many of the early settlers, many of them living there until they secured some land of their own.

In the early spring of 1849 there were five families settled at the Old Mission. When settled, their thoughts were to have a house of worship, so they bought the largest and best log house in Old Mission, excepting the original school and moved it about three quarters of a mile north east of the Mission on a forty acre tract, which those five families had purchased from the government, on which to build their church.

In September, 1849, the first Mass was read in this church. Bishop Loras sending a priest who walked in from either Dubuque or McGregor, Iowa. From then on services were held once every four months, if it was possible.

Early in 1854 this log structure was destroyed by fire. This divided the congregation, though by this time there [were] quite a number of settlers, and in the place of one, there sprung up, three churches in different localities.

In 1885 John Gertner and his daughter Mary Anna Huber built the Little Chapel on the site where the first church had been. This Chapel had its vision in France when John Gaertner, as a young man serving Napoleon’s army from Leipsig to Moscow, which ended at Waterloo, during the Russia Campaign left home, his mother made a vow to erect a chapel in honor of Saint Anthony to the Mother of Jesus if her son would return alive, which he did; but first owing to her restricted means, she was unable to fulfill her vow.

The family left France for America in 1832 by sail boat. They lived at New Orleans seven or eight years. From there they went to Oldenburg, Indiana, about fifteen miles from Cincinnati, Ohio. They then moved to Old Mission in the south western part of Winneshiek county, Iowa.

The mother died before the chapel was built. John thought it was his duty before he was called to make good his mother’s vow so with the aid of his daughter built the present chapel. He died one year later at the age of 94.

At the Roadside America.com 3 website, you can find a couple of comments regarding the St. Anthony of Padua Chapel:

Festina, Iowa – World’s Littlest Church
The church and grounds are still in good shape. The grounds also include a cabin that was built in 1848, deconstructed in 1993, and reconstructed in 1996. The original cabin was part of the Indian Agency and used by an agent of the organization. The cabin was used for Mass and therefore connects to the church. Inside the cabin there is also a large cabinet that was used as the first post office in the area.

There is no sign that explicitly says turn here to find the World’s Smallest Church. You have to watch the road names to know when.

Festina, Iowa – World’s Smallest Church
The world’s smallest church is no longer in active service, but is maintained by a local family and open year-round. It’s about two miles West of Festina, a small burg south of Decorah. The church seats about 8 people (more if friendly).